Bosch invented the automotive oxygen sensor, which is also referred to as an O2 sensor or lambda sensor. Our Premium Oxygen Sensors are thimble and planar switching sensors that are designed to meet or exceed OE specifications.
Key Features
Double laser-welded stainless steel body protects against contamination
Seared protection tube due to 100% functional quality test
Pre-coated threads with anti-seize compound right out of the box
True Direct-fit OE connectors and harness 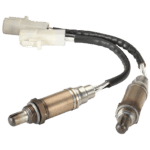 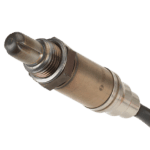 Frequently Asked Questions
Why should I change a damaged oxygen sensor?
An old, worn out, or sluggish sensor can cause a variety of different issues that include triggering a check engine light, lower fuel efficiency, generating harmful emissions and possible catalytic converter damage. To prevent any of these issues it’s important to replace an oxygen at manufacturer suggested service intervals.
Except for the connector assembly, aren’t all oxygen sensors basically the same?
No, there are five fundamentally different types of oxygen sensors: unheated thimble, heated thimble, planar, wide-band and titania. Within each sensor type, sensors vary in the design of the ceramic element, heater element and protection tube design, all of which affect how the sensor operates.
What does an oxygen sensor do?
The oxygen sensor sends a signal to the engine computer (ECU) based on the amount of unburned oxygen in the exhaust. This signal is then read and used by the engine’s ECU to adjust the air/fuel mixture entering the engine.

Wideband/Air-Fuel sensors perform the same function as a regular O2 sensor, but they precisely measure the amount oxygen in the exhaust rather than just switching between rich (too much fuel, not enough oxygen) and lean (too much oxygen, not enough fuel). Our Wideband sensors use a more sophisticated sensing element that provides a signal to the vehicle’s ECU that is proportional to the amount of oxygen in the exhaust.
Key Features
Advanced Wideband sensing element for exact air/fuel measurement
Robust sensor design increases sensor longevity
Seared protection tube due to 100% functional quality test
‘True Direct-fit’ OE connectors and harness
Pre-coated threads with anti-seize compound right out of the box 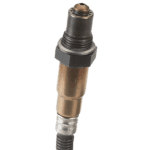 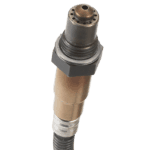 Frequently Asked Questions
How do I know if my oxygen sensor may be damaged?
Unfortunately, the symptoms of a slow or even a dead sensor are not always obvious to the vehicle owner. Some symptoms of failed oxygen sensors are:
Failed emissions test (high CO and/or HC typically)
Damaged catalytic converter (caused by an over rich fuel mixture)
Poor fuel mileage (caused by an over rich fuel mixture); engine runs rough
Sluggish performance
If the “check engine” light comes on while driving, check your oxygen sensor and, if necessary, replace it with a new premium Bosch Oxygen Sensor.
What will damage my oxygen sensor?
An oxygen sensor can fail prematurely if it becomes contaminated with phosphorus from excessive oil consumption, silicone from internal coolant leaks, using silicone sealant in the engine and some over-the-counter fuel additives. Even a small amount of poorly refined gasoline can affect an oxygen sensor. Environmental factors such as road splash, salt, oil and dirt can also cause a sensor to fail – as can thermal shock, mechanical stress, or mishandling. However as required by vehicle manufacturers, Bosch sensors are designed and tested with these conditions in mind. 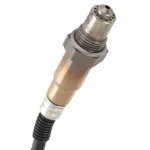 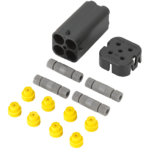 Frequently Asked Questions
Does Bosch test all oxygen sensors manufactured to ensure their quality?
Yes! Bosch tests all oxygen sensors it manufactures by subjecting each of them to a 1,000 degree Celsius functional test and a leak test to ensure environmental and functional robustness. The 1,000 degree Celsius test sears the outer protection tube, but ensures 100% functional sensor performance.
Where are oxygen sensors located and do they have different purposes?
Oxygen sensors have been standard equipment on almost all passenger cars and light trucks with gasoline engines since 1980-1981. Most vehicles built before the mid-90’s have one or two oxygen sensors (two were used on selected V6 and V8 engines starting in the late 1980s). Oxygen sensors are normally located in the exhaust system before the catalytic converter to measure exhaust emissions as they come from the engine combustion chambers. In 1996 with the federal mandated use of on-board-diagnostic systems (OBDII), vehicles also require additional oxygen sensors after the catalytic converter, to ensure that the converter is operating properly.
What is a universal heated oxygen sensor?
Bosch has created an aftermarket universal heated oxygen sensor program. These sensors meet OEM operating requirements and have a patented connector system easing installation. This connector system has been proven to be watertight, protect against contamination, and withstand the effects of extreme temperatures and engine vibration. Currently Bosch offers 12 different 4 wire sensors and 2 different 3 wire sensors to provide the closest match to OEM sensor performance. See the Technical Info tab for a diagram of the connector system, featuring special high temperature Posi-Lock® connectors.
I have a Bosch original equipment 4-wire sensor. What do the wire colors mean?
All Bosch 4-wire sensors have a black wire for the signal, a gray wire for ground and 2 white wires for the heater. Note: the wire colors and functions on non-Bosch sensors are not necessarily the same as on Bosch sensors.